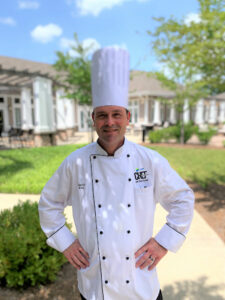 BRENTWOOD, Tn. – Jonathan King, executive chef at The Heritage at Brentwood, is one of five finalists in Life Care Services’ national 2022 Chef of the Year Competition. King, who competed in the company’s inaugural 2019 competition, is the only LCS chef selected to compete a second time.

The three-round, “chopped-style” cook-off will take place in front of a live audience on Thursday, July 21, at the Sysco Test Kitchens in Houston, Texas. The final two chefs will compete for the title at 2 p.m. Thirty-five chefs at LCS communities across the country applied for the opportunity to compete for the $10,000 cash prize.

“We are excited to see the hard work and dedication of these chefs culminate at this competition and be recognized on a national scale,” Jaclyn Gardner, event chair and director of operations management for Life Care Services. “At LCS, experience is everything, and these chef finalists have displayed that focus through exceptional dining at their communities.”

King has competed in numerous American Culinary Federation contests and hopes his 2019 experience serves him well in Houston this year.

The application process included a formal application, creation of a signature dish, a photograph the dish and a 5-minute video.

King has again reached back to his western North Carolina roots for inspiration by choosing pheasant as his main dish. In 2019, his entry was wild rabbit.

King used every part of the bird in his dish, simply called “Pheasant” and enhanced it with pancetta and fresh asparagus. He perfected it over the course of several days.

“That’s the irony of the application,” King says. “The judges are getting this packet of information. It’s based solely on the application itself and the video.”  They never actually taste the dishes they are reviewing.

Members of the event’s steering committee, who selected the finalists, are all senior LCS leaders with food and beverage experience and qualified to make the selections, King adds. 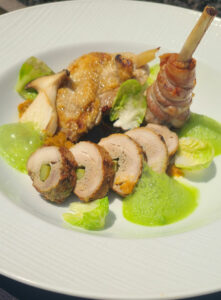 King has no idea what awaits him and his fellow finalists when they open their identical “mystery boxes” when the cook-off begins in Houston. In 2019, the boxes held a whole salmon, bacon, scallops, fennel, an artichoke and a pomelo, a type of grapefruit, King recalls.

Each chef will get 15 minutes to evaluate the box contents, create and write their menu and submit it to the judges. They then get one hour to cook. “At the end of that hour you have 10 minutes to plate and get those plates to the judges,” King says.

Though the Sysco kitchen is large, King says during the contest, “You’re still crossing paths because it’s constant motion.”

The competition will be live-streamed to each of the LCS communities represented. At The Heritage, many residents will attend the planned Watch Party to cheer “Chef Jonathan” on and see the winner is announced.

King loves his job and his “customers,” the residents at The Heritage. “It truly is the best place I’ve ever worked.”

Heritage residents reciprocated that love in 2021 and 2022when their votes resulted in Jonathan’s Top 3 finish in the Best Chef category of Williamson Home Page’s Williamson’s Best Awards competition.

King earned his associate degree in culinary arts while completing a three-year apprenticeship at the Gaylord Opryland Resort and Convention Center through the American Culinary Federation. He joined The Heritage’s culinary team in 2012.

His wife Allison and The Heritage’s executive director Jon Tagatz will be in Houston to cheer him on.