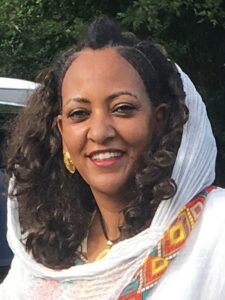 In July 2007, just months after The Heritage at Brentwood opened its doors to senior residents, Almaz Awalom started her career at The Heritage’s skilled-nursing component, Somerfield Health Center. As a full-time, 2nd shift Certified Nursing Aide, she started out with only five residents on the Sunflower wing but watched as the Sunflower and Monarch halls soon filled up with residents.

In 2013, she saw the new Cumberland, Harpeth and Radnor wings constructed and open so Somerfield could accommodate more residents. Today she serves as a Heritage historian due to her seniority.

Almaz takes pride in the relationships and bonds she builds with the residents in Somerfield and, like everyone who works there, she has felt the negative and the positive impact of COVID-19 over the past year.

While reflecting on two recent resident losses, Almaz shared a personal story about each with tears in her eyes. One resident repeatedly told Almaz that seeing her every day made a difference to him because she always opened the door with a smile. The other resident arranged a surprise birthday party for Almaz in her room with some of the other staff.

The pandemic has had positive impacts as well, she says. She is witnessed Somerfield employees pull together as a team knowing it never knows what will happen any given day with the residents. It also reminded her to love others and be positive.

Almaz, a native of Eritrea East Africa, moved to the U.S. after marrying her spouse, Gabre. She became a Certified Nurse Aide in California before moving to Tennessee with her family about 14 years ago. She is immensely proud of her two children who are both students at Vanderbilt University. Son Kibret is majoring in economics, and daughter Heaven wants to pursue a career as a nurse practitioner. Both are expected to graduate within the next year.

When she is not at Somerfield, Almaz enjoys being home, spending time with her kids, cooking and gardening.

Somerfield’s Director of Nursing Gail Boylan describes Almaz as loyal and dependable with extraordinary clinical skills. She cited Almaz’s dedication to her patients, noting that she worked straight through February’s winter storm week without complaint. Lastly, Boylan added that Almaz is well-loved by her residents and peers.

When asked what has kept her at The Heritage all these years, Almaz smiled. “It feels like home,” she said.